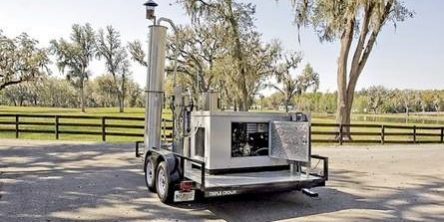 Anyone familiar with horses knows about the manure.

But what they may not realize is the big money it costs to have this byproduct of the horse industry carted off and disposed.

An Ocala-based company is hoping to make that manure an asset and put it to work. Planet Green Solutions has designed, developed and is now starting to manufacture a compact gasification system that will extract hydrogen from manure without burning it and, in turn, use that hydrogen to produce electricity.

“The system can utilize many other forms of biomass. This opens up avenues for other light industry applications like sawmills and others who have a cellulose-based waste product,” said Chris Morrison, Planet Green Solutions’ CEO.

The gasification technology is not new, but where it has been implemented, the systems are built on an industrial scale. Morrison’s technology allows for a smaller application, which can be installed on site at farms or businesses.

“The smaller scale makes it economically feasible for larger horse farms,” Morrison said. “With the system, you would eliminate what you pay to have the waste hauled away and possibly eliminate the power bill.”

GoldMark Farm in Ocala was so impressed by the design, they bought one.

It’s the first system sold by Planet Green Solutions and the installation should be completed in less than two months.

“We are very excited about it. Manure removal is a huge expense. If this thing gets up and running like it should, I can imagine it on every farm that has the capability. It makes all the sense in the world,” said Todd Quast, GoldMark farm manager.

Marion County has more than 35,000 horses, which produce tens of thousands of tons of waste a year. It’s not all manure. The waste also includes straw and wood shavings used for bedding. Smaller farms spread the manure on their pastures, but larger operations have no other alternative but to have it hauled away.

“When you haul 140-stalls worth of waste, that cost $200,000 a year. That’s big. Plus, our electricity bill runs about $5,000 a month. This reactor is supposed to produce $6,000 worth of electricity a month. I can’t wait for the check to come back from the electric company. If this works like it’s supposed to, it’s a win-win-win all the way around,” said Quast.

In the past, some have disposed of farm waste in sinkholes or gullies. This has the potential to contaminate the groundwater.

Instead, all of it could be used in the gasification reactor, which feeds electricity back to the utilities company, Morrison said.

It’s not the first time GoldMark has embraced new technology. It was one of the first thoroughbred farms in the nation to install a synthetic surface on their training track. They also were among the first to install rubberized mats in their stalls, which reduces the amount of bedding needed and are more comfortable for the horse.

“We always have tried to be state-of-the-art and cutting-edge. We are always looking for ideas that are good for the horse, farm and the environment,” Quast said.

One of the biggest selling points of the system for Quast was the ease of use.

“The simplicity of it is great. There are really not a lot of moving parts,” Quast said. “It’s not an elaborate maze of parts and should be fairly simple to run. Basically, you just load the waste right into the hopper. We’re taking a chance, but it all makes total sense.”

Gasification involves applying high heat and oxygen to biomass waste material. There is no burning in the process and very little emissions. In other applications, the fuel extracted by the process can be liquefied and used as synthetic gasoline and other types of synthetic fuels, Morrison said.

The resulting ash could be used for fertilizer or other applications.

“I think the market has a tremendous potential. We can’t even see how wide the potential is right now,” he said. “Tree limbs, waste paper, municipal solid waste, water treatment sludge, even peanut shells. It can all be used in this process.”

Morrison focused on horse farms for the system, but he has also had interest from theme parks and other businesses that produce large amounts of paper waste at concessions.

“Every time I see it run and it’s producing carbon-neutral energy I think, ‘Why didn’t we do this 30 years ago.'” he said. “The response has been overwhelming.”

In addition to Morrison’s on-site system, the Florida Thoroughbred Breeders’ and Owners’ Association announced in 2008 that it was partnering with MaxWest Environmental Systems to build a gasification plant in Ocala.

Last year, the project received a $2.5 million state grant to help in the effort. MaxWest, a Houston based company, has said the proposed plant could handle 100,000 tons of waste a year and produce up to 10.5 megawatts of electricity.

Company officials were looking at county-owned land near the Martel Landfill on State Road 40 and Southwest 60th Avenue to build the plant. Initial plans called for the plant to open in 2011. It would cost an estimated $25 million. FTBOA officials wouldn’t comment for this report.

MaxWest also operates a gasification system in Sanford as well as several others in the U.S. and Canada.