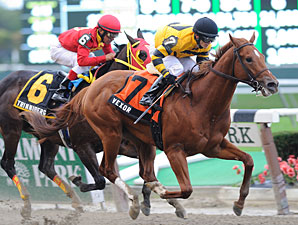 Vexor, the longest shot in the field at odds of 18-1, outlasted Trinniberg for a three-quarters-length victory in the $150,000 Nashua Stakes (gr. II) at Belmont Park Oct. 2 (VIDEO).

The Nashua, traditionally run as a one-turn mile at Aqueduct in the fall, was moved to the Belmont meet this year along with the Tempted (gr. III) for 2-year-old fillies and shortened in distance to six furlongs. Vexor completed the distance in 1:10.71 over a main track listed as “good.”

Trinniberg finished second by 4 1/2 lengths over third-place Seeker. She Digs Me, the 7-5 favorite in the field of six juveniles while toting top weight of 122 pounds, finished last after racing awkwardly on the backstretch and fading out of contention on the turn.

The start of the race was delayed for several minutes when Jagati required a bridle adjustment. When it finally went off, Trinniberg, ridden by Cornelio Velasquez, went to the front by a half-length over Vexor and those two showed the way through swift fractions of :22.12 for the opening quarter-mile and :45.49 for the half. Vexor, on the outside, took a short lead in upper stretch but Trinniberg refused to yield. Those two battled on even terms past the furlong pole before Vexor inched away in the final sixteenth of a mile.

The winning chestnut colt, by Wildcat Heir  –Real Clever Trick (by Yes It’s True), was a $90,000 Ocala buy as a yearling in August 2010. Carlos Rafael and Briggs and Cromartie Bloodstock bred Vexor in Florida.

Following a second-place finish in his debut in June at Belmont, Vexor broke his maiden in his next start in sharp front-running style at Saratoga Aug. 10. He was jumped in the Three Chimneys Hopeful Stakes (gr. I) Sept. 4 at Saratoga, but backed out quickly on a sloppy track after being bumped at the break. He finished eighth at odds of 31-1.

“His maiden race kind of shows it wasn’t a fluke,” Kimmel said. “He ran a very good race up there. We had some question marks after he ran so poorly in the Hopeful. It was so bad that we just kind of had to throw the race out.

“He came back and had two nice works. Today he was on the outside, tracked the speed, and was there when it counted. It’s nice to get back and get a good performance out of him. He’s obviously earned his way into the Breeders’ Cup Juvenile Sprint. It was very exciting, especially after the tough week it’s been with Fire On Ice getting hurt.”

Trinniberg, the runner-up in the Hopeful at odds of 68-1, returned $6.50 and $4 in his return for trainer Bisnath Parboo.

The Steve Asmussen-trained Seeker, the 5-2 second choice off his 6 1/2-length maiden score on a sloppy Saratoga track Sept. 5, paid $3.60.

Jagati was next, followed by Hannibal Lecter, and She Digs Me. The Sapling (gr. III) winner was seeking his fourth consecutive victory.