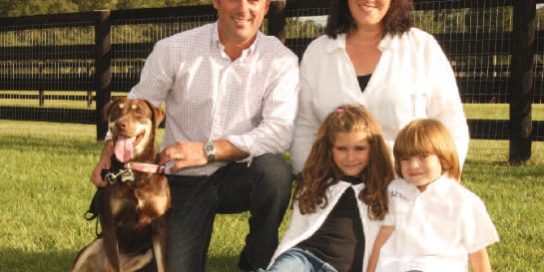 What is the map that leads from Ireland to Jockey school to chef school to the jockeys’ rooms of the New York Racing Association to Ocala, Florida?

How does an Irish lad windup in Ocala as a Pittsburgh Steeler fan with a house full of memorabilia? Ask Karl Keegan, assistant trainer at GoldMark Farm. He didn’t have a map; he just found his way, assisted by his wife Dana and a host of good people along the way.
As a youngster, like a lot of Irish boys, Karl wanted to be a jockey. “Horses have been in my heart since I was a kid,” Keegan explained. “When I was a kid, I would steal the gypsies’ horses and go for joy rides.”

Why wouldn’t Karl want to be a jockey? He loved horses, and after all, his father was a jockey. “I worked for a guy very influential in my career—trainer Norman Cassidy,” he said. “He and my dad are golf buddies, and both of them had been jockeys.”

The job with Cassidy was Keegan’s first real job and is still a foundation of his career. “Your first job, you show up and learn so much,” Keegan said. “Those first things you learn and use for the rest of your life.” Those early lessons Cassidy gave Keegan are paying off now. “I’m teaching my daughter to ride now. I didn’t realize how hard it was to teach someone those important steps. He (Cassidy) took the time to teach me those things. Every time I go back to Ireland, I try to see him.” Eventually, Keegan found his way to the jockey school at the Curragh. He was placed with trainer Dessie Hughes. However, his father was not anxious for his son to become a jockey, and as a result, Karl’s life took an entirely different course.

“I next did two years in chef college,” he said. “I liked it. I was pretty good at it, too. I would think outside the box with flavors, and it would work.”

But once again, the call of horses and racing were too strong and Keegan returned to England to work as a work rider for such trainers as John Gosden, Stanley House, and Henry Cecil, all very successful trainers. He also worked for Mohammed Moubarak. While in the employ of Moubarack, trainer for Buckram Oak Farm, Keegan’s life course took an extreme turn. “I flew over in ’92 for the Arlington Million,” he explained. “When I saw the racing over here, I was very excited. Going to Arlington Park on that day, I saw that the way (Richard) Duchossois took care of the Europeans was amazing. “While there, Mohammed turned to me and said, ‘We’re moving the whole operation from England to the States, and you are one of the chosen few that I want to come over.’”

When Keegan and the Buckram Oak crew reached the States, they drove from New York to  Florida and back again every year, but the third year was the charm. He met Dana, his wife to be, in New York. With a change of motivation, Keegan decided New York looked much better, and he took a job as a valet in the jockeys’ room.

“I also freelanced as an exercise rider in the mornings for such trainers as Neil Drysdale, Bobby Frankel and Scott Lake. I worked from six to six. I woke up and went to the track to ride. I would run home to get my bag and come right back to the track. “I’d go into the sauna, shave and clean up and go to work again. (The Jockeys’ room) was like a big locker room. I became good friends with many of the jocks.” In that environment and working horses in the mornings, Keegan met everyone at the race track—jockeys, owners, trainers.

“People are surprised at my phone book. You might say I have everyone’s number,” Keegan laughed. During those years working in the jockeys’ room, Keegan developed another major interest. He collects memorabilia. “Working in New York all of those years, meeting those legions of people, collecting started off just getting some programs signed. Then I blossomed into a full blown memorabilia buff.” The walls of the Keegans’ home are covered with framed pictures and display items, all signed.

“This is my prized possession,” Keegan said, pointing to a lighted display of a riding saddle and a pair of boots. “It is Jerry Bailey’s racing saddle and boots. It is probably one of ten saddles that Jerry would have during his career. “I saddled Cigar for jockey Jerry Bailey before The Jockey Club Gold Cup. Jerry and I had become golfing buddies. On Gold Cup day, after he and Cigar won, I asked Jerry if he would give me a saddle. The day Jerry retired he came over to my bench and gave me the saddle.” Other items in the amazing collection include Julie Krone’s goggles and whip, Lafitte Pincay’s goggles, Eddie Maple’s boots, Pat Day’s riding pants, English champion jockey Kieran Fallon’s whip, a signed picture of Javier Castellano and Ghostzapper, Gary Stevens’ whip from his Belmont ride on Point Given and a 2001 Breeders’ Cup Classic saddle cloth signed by all jockeys that rode that day.

Peb, the cartoonist for the Daily Racing Form, attracted Keegan. “I don’t have enough room for all of Peb’s stuff,” he said. “I bought his collection when it went on sale at the Museum of Racing.” Somehow an Irish lad was drawn to the Pittsburgh Steelers. Keegan explained that he identified with the Art Rooney family, the Irish owners of the Steelers. He went to a game every year. Among his Steeler memorabilia is a large picture of Big Ben Rothlisberger, hanging in his daughter’s room. “I wanted my daughter to have a good role model instead of Hannah Montana,” Keegan explained with a smile. He also has a picture in his son’s room of Three Rivers Stadium from the last game played there. The display includes a piece of turf from the stadium field and all of the home tickets from that season. Keegan also has a signed picture of Terry Bradshaw and a signed Rothlisberger football. Despite the love of his job and his access to memorabilia, Keegan wasn’t completely happy in New York. “I was sitting in the car on the Parkway, listening to car horns,” he said. “The education of our children is important to us.” The two factors combined to cause him to think about change. He had never been to Ocala, and on an earlier visit to Orlando to visit Dana’s grandparents, who live there, he had driven to Ocala, where he met Ian and Niall Brennan and Eddie Woods, all major players in the two-year-old market.

A few years later, he would bump into Ian and Niall at the Ryder’s Cup at The K Club in Ireland. They told him about GoldMark and encouraged him to apply. He called Todd, got an interview and a couple of weeks later he got the call he was waiting for. “When I saw GoldMark, I was awestruck. I came back and went to work for (general manager and trainer) Todd (Quast) and (owner) Paul (Bulmahn). “Wanting a good education for our kids, it was the best thing that ever happened to us. My daughter is blossoming in school. She is six and in the first grade. To me, both of them are going to such a terrific school.” In addition, the Keegans are able to give their children Amelia and Aidan, the lifestyle they wanted for them. They have a barn for their own horses, a tire swing hanging in a big tree near the house and about 250 acres for the family to enjoy.

The working at Goldmark is a great experience too. “Todd is hands down the best horseman I have ever worked for, and working with Todd and his wife Lori is a joy every day. I am also learning a great deal from our two vets Dr. Greg Bonnenclark and Dr. Jonathan McClelland.”

For now, the long road that began in Ireland for Keegan has come to a stopping point in the Ocala country-side for Keegan and his family.