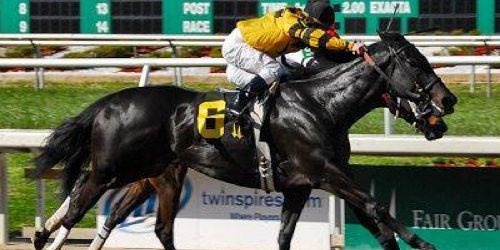 The first stakes race on Louisiana Derby Preview Day was the $60,000 Pan Zareta Stakes for older fillies and mares sprinting 6 furlongs on the main track. After 2 horses scratched out, only four went to post with Dubai Majesty sent off as the even money choice, exiting a nose defeat in the Sunshine Millions Filly and Mare Sprint last out. In to challenge her were 3-1 second choice Coy Cat, second in the Leggio Memorial, 4-1 third choice Simplify, who was third in the Leggio, and 6-1 Double Espresso, second in the Orleans Stakes at Delta Downs before winning an allowance at Oaklawn last out.Simplify went to the front down the backstretch under jockey Shaun Bridgmohan, and was joined on the turn by Double Espresso to her outside through fractions of 22.96 and 46.70.. Through the stretch, Simplify tired and faded to past, as Double Espresso opened a short lead on favorite Dubai Majesty at the 1/8 pole through 5/8 in 58.43. Dubai Majesty put in a rally but Double Espresso was up to the challenge, holding her off by a head in 1:10.82. It was a long 4 3/4 lengths back to Coy Cat third, and another 5 1/2 to Simplify last.Double Espresso, a 4-year-old daughter of Medaglia d’Oro improved her record to 5 wins, 1 second, and 3 thirds in 10 starts, earning $161,933 for owner Goldmark LLC.Winning trainer Tom Amoss said, “Her works leading up to the race at Oaklawn, which was not where we wanted to travel but the race here didn’t fill, as well as how she trained leading up to this one were really indicative of a horse sitting on a big race. You know, I’m a little bit tempted to see how far she can go and obviously that means the stake in mid-March (the March 13 $200,000 New Orleans Ladies) running against the nation’s best (Rachel Alexandra). We’ll see how that plays out.”