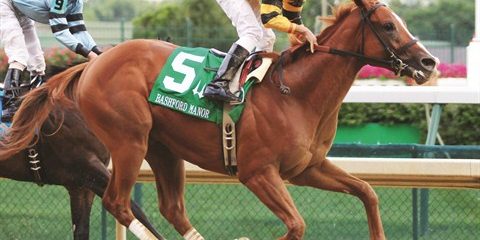 “I’m very excited,” Amoss said. “These don’t come around in my barn often, and I’m certainly grateful to Goldmark Farm for the opportunity.

“I think the ability to come from that far off the pace on a day like today when it looked, to me, as the day went on that speed was a good commodity (and) the wide trip he had … I think those things were very exciting. And, I would say, a will to win. The race was not decided until very late.”

Miguel Mena guided Backtalk to victory in a time of 1:10.07 on a track labeled fast. Mena said he decided to take back and let the speed-burners fight it out.

“I knew the pace was going to be fast and they had to come back,” said Mena, who has been aboard Backtalk for all three of his races. “Turning for home, my biggest concern was making my horse switch leads. Sometimes, he’s a little bit funny about that. Thank God, he didn’t give me any problems and switched leads.”

Backtalk, the 3-2 choice in the field of nine, was sixth as the Wayne Lukas-trained entry of Soundman and Activity Report fought it out with Interactif on the front end through quick fractions of :21.99 and :44.96 for the first half-mile. Backtalk swung six wide at the top of the stretch and was still sixth with a furlong left to run. By then Louisvilleluminary, ridden by Julien Leparoux, had seized the lead from Activity Report.

It was a half-length to Nacho Friend in fourth. He was followed by second choice Bulls and Bears, who had a poor break, Bricklayer, Activity Report, Interactif, and Soundman.

Clover Leaf Farms bred Backtalk, who sold for $250,000 at the 2008 Keeneland September yearling sale last year. The chestnut colt is out of the Affirmed mare Apasionata Sonata.

The victory, worth $90,000, doubled Backtalk’s career earnings to $180,0985. Backtalk overcame a stumble at the start of the six-furlong Bashford Manor to win his second start by one length as the 4-5 favorite. He began his career with a 2 3/4-length tally over maidens going five furlongs at Churchill.

“I was a little nervous because this is my first meet at Saratoga, but I got a great horse with a bright future,” Mena said. “He’s learning race by race. You can see him in the post parade being so calm. He felt good and had a good trip. A couple of horses got a little tough in the end. He never quit. He fought through the end.”

As for Backtalk’s next start, Amoss said he would discuss it with GoldMark Farm owner Paul Buhlman and farm manager Todd Quast.

The winner carried 121 pounds and paid $5, $3, and $2.70. Enumerate, who was coming off a five-length maiden win in his debut at Churchill June 28 for trainer Steve Asmussen, returned $4 and $3.40. Louisvilleluminary, who also broke his maiden at Churchill for Asmussen in his most recent try June 20, paid $4 to show.

“They ran well,” Asmussen said. “I was surprised Enumerate wasn’t on the lead the way he ran the first time. (Leparoux, on Louisvilleluminary) thought he may have hesitated when he made the lead, but they were second and third to a nice horse.”